They provided JJC with a $10,000 donation to the PCIT program. In addition, they held a student competition, in which the ISA Will-DuPage Section honorably renamed to the “Edward Meyers Annual Student Competition” to pay tribute to the former JJC instructor. Edward “Eddie” Meyers was instrumental in starting the competition and was also an active member on the ISA Will-DuPage
Section’s board. At a morning presentation, members of Meyers’ family joined representatives from both the ISA and JJC to accept the plaque.

The student competition featured eight teams, with some traveling from as far away as North Dakota. In the afternoon, Congressman Bill Foster, who is a supporter of several STEM education initiatives, met with the students and shared some of his personal experiences. He also took a tour of the PCIT lab and observed the students in action during the competition.

David Riojas, President of ISA’s Will-DuPage Section, said, “We became involved in this competition as a way to attract a younger generation to this industry and also let them know that automation and instrumentation is a viable career path.” He also explained that the ISA is an excellent resource for students to become associated with because they will have an opportunity to network with other professionals in the industry.

The companies that had an active role in this year’s competition also developed the skills challenges that the students had to solve. They included: George E. Booth, Inc. (Endress & Hauser), Rockwell Automation and Novaspect, Inc. (Fisher Valves).

There were not only programming issues, but rather real-world scenarios with problems that the students would have to figure out such as air leaking from a valve or reading a data sheet with minimal instructions. This made the challenges a little tougher because it was not spelled out exactly, but something that could realistically happen on the job.

Students competed in five time-based, skills challenges and received points on the following criteria: teamwork, problem solving, accuracy and practical thinking. At the conclusion of the skills challenges, the top two points earners advanced to the Quiz Bowl. The Quiz Bowl was set up in a jeopardy style, buzz-in format. BSC’s team “The Seebeck’s” won first place and received $500 for their PCIT program while NDSCS’s team “The Edisons” finished in second place and received $400, respectively. Both teams received a plaque and ribbon. Joliet Junior College’s team “Error 404” finished in third place.

JJC’s Technical Department Chair Greg Pakieser said, “We are so grateful for the continued support from the ISA as well as our corporate partners. We can’t say thank you enough for their commitment to our PCIT program and providing students with valuable educational opportunities in the classroom and at events such as our annual competition.”

For more information about the PCIT program at JJC, visit www.jjc.edu/info/technical.

If your company is interested in getting involved in these types of events or contributing to the program, please contact Greg Pakieser at (815) 280-2305 or email gpakiese@jjc.edu. 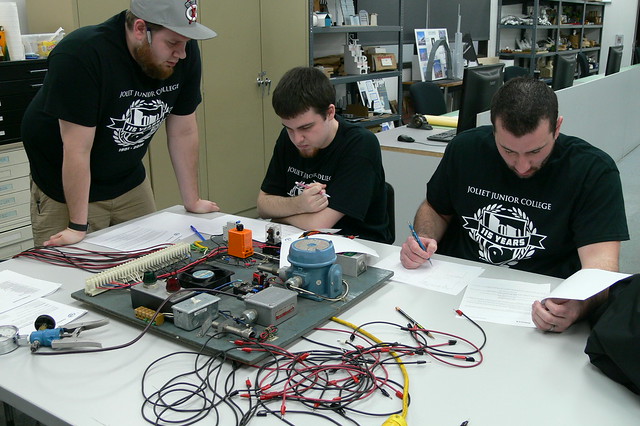